WRITING / What is Conversational Journalism? 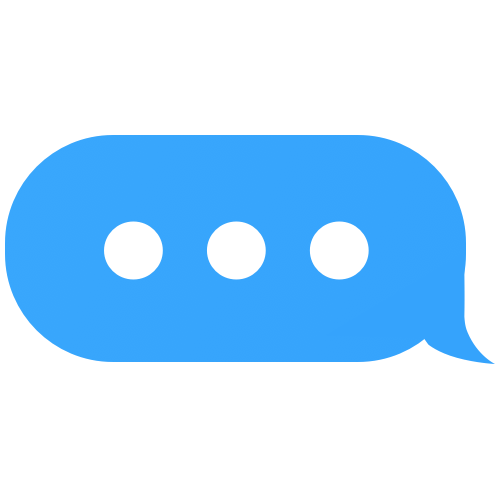 What is Conversational Journalism?

Sometimes technology makes weird jumps back in time and reinvents channels or mediums. The latest evidence of this circular move forward is the emerging trend of conversational commerce. This term, though not invented, but made popular by Chris Messina, can be broken down in one fairly simple picture.

In a nutshell, conversational commerce tries not to build a business through a storefront, online shop or homepage, but a simple chat interface. This interface can live inside an already popular app like Facebook Messenger, WhatsApp, WeChat, or the SMS application on your smartphone, but it can also exist as a standalone app. Also, the person on the other side of the message doesn’t have to be human but can be anything from a stupid program or a slightly less stupid bot to a full-fledged AI. Important is only the medium of interaction: chat.

Without a doubt, being more conversational is also interesting for journalists and news organizations and a couple of outlets are already using chat as a way of reaching their readers.

Quartz is “texting” the news

The latest example is Quartz’s first and only iPhone App, which the organization launched last week. Users can receive the news via a pre-programmed course of messages, which are sent to the reader. After every new message, the reader gets two possible answers to choose from, which either ask for more details or trigger the next topic to be sent. Of course, the app does not only send texts, but also pictures, gifs, and—of course—emojis 🎉📰✌🏻.

I think Quartz’s approach is interesting on many levels:

Though one could argue, that Quartz’s app merely simulates a conversation, but it does so brilliantly. 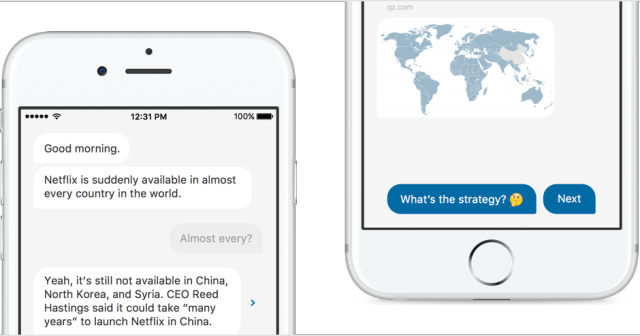 Another interesting and more talkative approach is the New York Times’ election slack-bot. In short: this bot posts links to NYT articles about the election into a designated channel. One would be fast to discard this as nothing more than the cheap try of the NYT to go fishing for clicks inside your slack team. But there is a nifty little feature programmed into the bot.

This command will enable you to send a question about the election into the NYT newsroom. The answer—if provided— will then be posted into the bot‘s channel as well.

Yes, you can talk directly to a NYT journalist from inside your Slack team.

A couple of days ago, WhatsApp announced 1 billion monthly active users on its app. The service, which also belongs to Facebook’s hegemony of communication apps, also announced mid-January, that it would stay free—forever. And with great user count comes an even greater curiosity of publishers on how to reach those users.

The BBC wasn’t the first outlet to use the messenger for publishing news, but one of the most successful. During the Indian elections, the BBC covered the biggest democratic process in the world on WhatsApp and WeChat by distributing short text messages, pictures, audio, and videoclips, as well as asking for feedback in form of an emoticon.

When Ebola struck out in West-Africa, the BBC published information about the disease, health alerts, and infographics through the app. In return users sent back local news, rumors, and questions, which the editorial staff tried to answer or research in time.

Though WhatsApp is still extremely limited with a missing API and a laborious subscription process, the BBC found an interesting way of not only reaching its readers but also connecting a newsroom to the events unfolding on the ground. 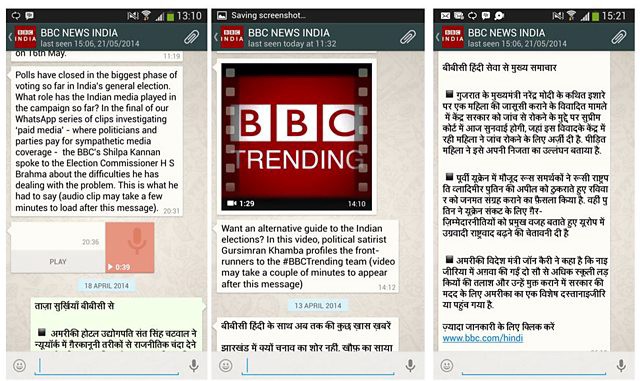 The easiest way to describe Purple is by inventing a new buzzword: messaging-first newsroom. Founded by Rebecca Harris, Purple texts you the news in a similar manner as Quartz, but as real texts. It doesn’t live in an app, but inside your SMS application and instead of choosing from two prewritten answers, readers have to text back trigger words, which will then result in a new message being sent. (Or, in case of the republican debate, in a Trump gif)

With this approach, Purple is one of the purest examples of conversational journalism. Like the BBC, Purple tries to cover certain events, instead of publishing ongoing editorial content. Though the service is limited to US cellphone numbers, a WhatsApp, Messenger, and Slack extension seems to be in the works. 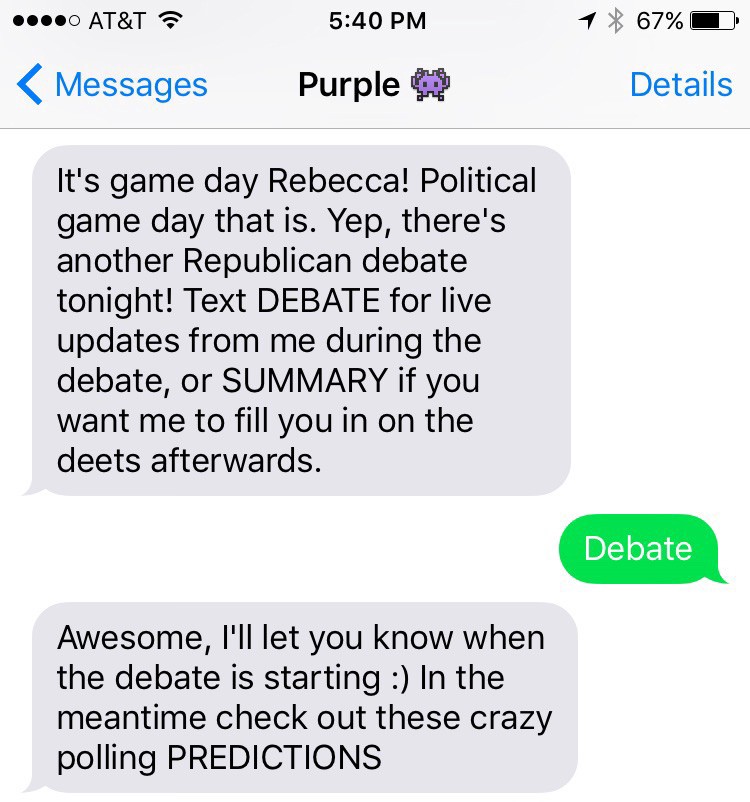 Where does this leave the news?

I think we will see two big trends determining the future use of messaging for news media: AI and platforms.

With Facebook announcing and testing “business for messenger”, as well as a secret API for developers, the groundwork will be laid by the end of the year for outlets to start using messenger as an active channel. WhatsApp announced similar plans, though kept quiet on the details. But we can be sure that both services will borrow heavily from the Chinese WeChat. Those platforms alone have a combined MAU of around 1.8 billion people.

The second trend—AI—is harder to nail down. We won’t see an intelligent, news-serving AI in the near future. But we will see programs and bots supporting the work of journalists. Maybe a bot, that automatically answers questions, that a journalist has answered before? Or automatically serving us news, which an algorithm deemed relevant, based on our location data and likes?

A deeply personal approach can be a great opportunity for some news organizations if it’s not used to simply throw links at people. Messenger will need the same attention and approach as every other medium and social network and we will certainly see more experiments of start-ups and outlets. It won’t be the future of journalism, but maybe one possible way.