A couple of notes on internal communication tools and practices for organizations that are either distributed, or working in a hybrid model, or are in need of structured ways of sharing information.

The problem with hybrid or distributed work

One problem of distributed/remote/hybrid work is the missing bandwidth of face-to-face communication or as a study of 60,000 Microsoft employees found

Our results show that firm-wide remote work caused the collaboration network of workers to become more static and siloed, with fewer bridges between disparate parts. Furthermore, there was a decrease in synchronous communication and an increase in asynchronous communication. Together, these effects may make it harder for employees to acquire and share new information across the network. 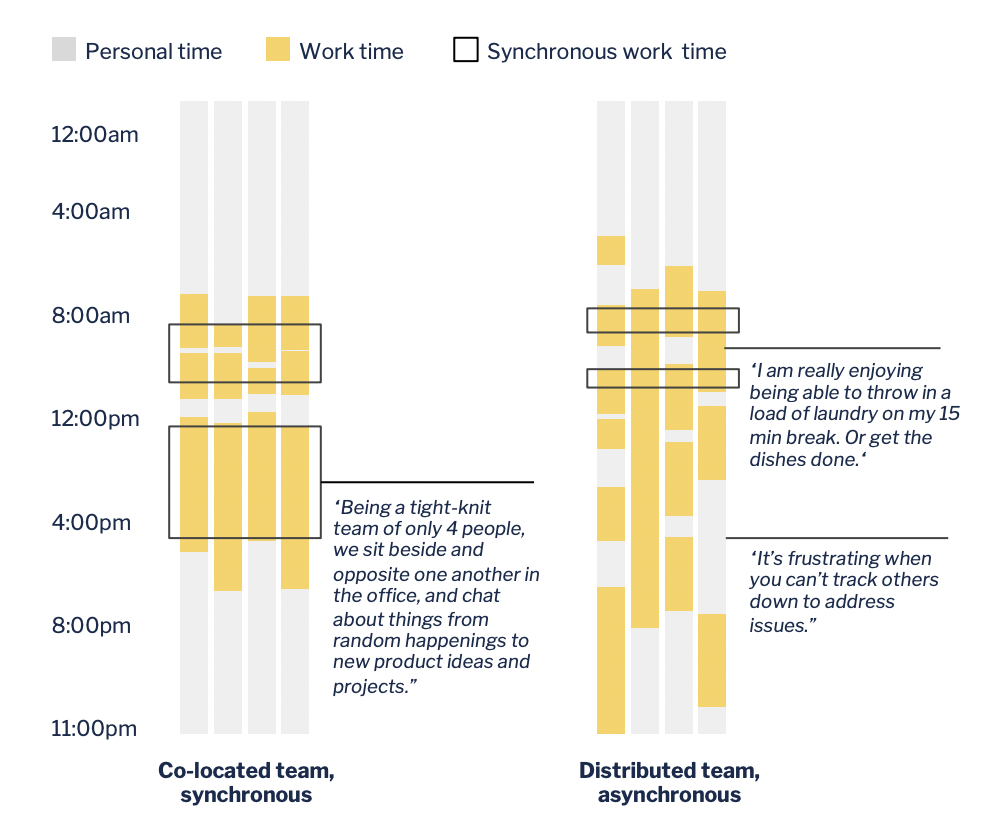 The curious case of Automattic

Automattic, the company behind WordPress is an interesting case study. It employs 1.700 people across multiple continents and time zones since 2005 and has an interesting work culture.

To accomplish this the company uses a custom version of WordPress called P2 as an internal forum/intranet/task-managment/documentation-tool: “P2 or it didn‘t happen.“

In conclusion: if a company wants to work as a distributed/hybrid organization, in the long run, it might have to rethink its communication infrastructure and adopt one that is:

Why is Microsoft moving in the opposite direction?

Microsoft has dominated offices around the globe with its software, lately bolstered through “Microsoft Teams” a chat/video-call tool build for communication inside teams and organizations. But its features and internal logic are not built to ideally support a written communication culture.

Microsoft has lately also been more focused not on solving these issues but instead working on the video components of the software and even integrating its version of the “Metaverse” (formerly called “3D” or “VR“) in the form of virtual spaces.

Microsoft seems more interested in creating a skeuomorphic digital office than actually helping people do good work in a distributed team. (And you can guess which tool the 60,000 Microsoft employees most likely used from the study at the top.)

Honestly, Microsoft… just force people to add agendas to their meetings. It would make a bigger difference than starring at the feet-less avatars of my colleagues.

Okay, let‘s talk about some interesting practices that fit the mold of asynchronous and written communication.

While not explicitly written for distributed teams, “agile communication” is a great way to structure communication inside companies.

Your comms strategy should simply be “Show the thing. Be clear. Be brief.” Any time you spend trying to come up with something that says broadly the same thing, only using many more words, is probably wasted time.

It argues in favor of blogging at the speed of work with a heavy focus on quick, short posts, showing the artifacts of work, and building up a archive of posts.

The practice is described in a great piece on the Gov.uk blog as well as in the book of the same name by Giles Turnbull.

According to myth: Amazon banned PowerPoint presentations in 2004 and instead installed a culture of written memos.

Powerpoint-style presentations somehow give permission to gloss over ideas, flatten out any sense of relative importance, and ignore the innerconnectedness of ideas.

One format that caught on is the “six pager”. A narrative document used to develop and pitch ideas, product, and project. And yes, it should be six pages long.

The main goal of authoring this kind of document is to craft the entire thing as a narrative. That doesn‘t mean it needs to be an entertaining story. It merely means there are no bullet-point lists, no graphics, and no fluff in the document‘s core 6-pages.

Meetings thus consist mainly in the form of reading circles in which these documents a read, critiqued, and discussed.

You are usually given 20–25 minutes at the beginning of a 60-minute meeting to read the doc from beginning to end. Most people write down questions or feedback directly on the printout since using a computer during this time is frowned upon.

All print outs are handed back to you at the end of the meeting. The rest of the time consists of everyone in the room challenging your position, questioning your tactics, and digging through the data to make sure it is valid. It‘s incredibly stressful, and when the meeting is over, it‘s your responsibility to update and recirculate the document to everyone as a final version. There is no ideation or brainstorming during these kinds of meetings.

These documents are interesting because:

I already have a short note on living docs in this garden, so I won‘t repeat myself too much here.

In short: living docs are shared multiplayer-edited documents (think: Google Docs) that work as growing documentation of every project. Instead of having dozens of different documents, everything gets sorted into one big one.

Some tools and platforms I find currently interesting:

Related Articles from other smart people